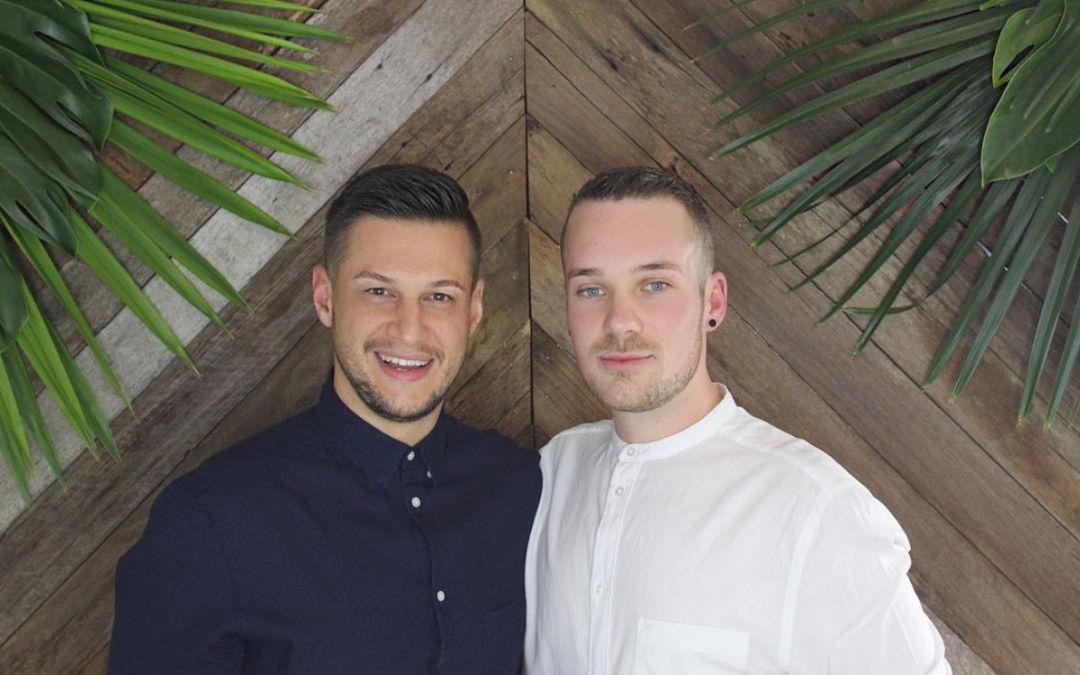 Where  it all started…

We are all in love with the Joshua’s 30 day proposal,  but how did the winners of the $50k Wedding in Paradise initially meet?  We wanted you to get better acquainted with the Joshua’s. So, we have asked them all of those little details that we know you are all dying to know!!!

Where are you both from &  where do you live now?

The Joshua’s are originally both country boys – Josh S. grew up in Murrurundi, NSW and Josh B. grew up in Glen Innes, NSW.  After high school they both moved to Newcastle & now they live in the City just a couple of blocks from the beach!  Both Joshua’s work in the contact centre industry –  Josh S.  for the Commonwealth Bank and Josh B. for NIB health insurance.

How did you meet one another?

Josh B.  and Josh S.  were both out one night…  Josh B.  had eyes for Josh S.,  howeverJosh S.  may have been a little drunk! Several months later the boys were both single and had begun chatting on Facebook. They then met for coffee one night in January 2012 and following the coffee they went for a long walk along the Newcastle beaches and it was that moment they knew it was true love. It  was when Josh S.  was about to walk into a spider web and Josh B.  very heroically saved Josh S’  life, by jumping out in front and clearing the spider web (really just an excuse for a hug) as Josh S.  is terrified of spiders!!!  Josh S.  then had a man who was not only the hero he had always dreamt of meeting but he could live to see another day!!! Following that fateful night, a series of dates continued – lots of dinners out and more long walks along the beach!

What was you reaction when you found out that you had won?

We were speechless!  We both just sat in disbelief, not talking, not crying, not laughing just in shock. We both then spent the next 2 hours shaking and sweating with excitement after calling you to confirm we had in fact won!!!

What part of the wedding are you most excited about?

That’s a difficult question to answer… We are just both very excited about the whole day and getting to celebrate our love with all of our closest family and friends in such a beautiful location.

Have you ever visited Airlie Beach before?

We have never been!!!  We attended a friend’s wedding last year in Port Douglas in Far North Queensland and it was just a beautiful setting by the beach, with the palms, the breeze and dancing under the stars. Now that we can have all of that – that’s what we are most excited for! Neither of us have EVER seen a sea turtle in the wild, even though we have been snorkelling on the reef before, we just weren’t lucky enough. So if we were to also achieve that when in Airlie together that would be the absolute peak of our good luck!!! 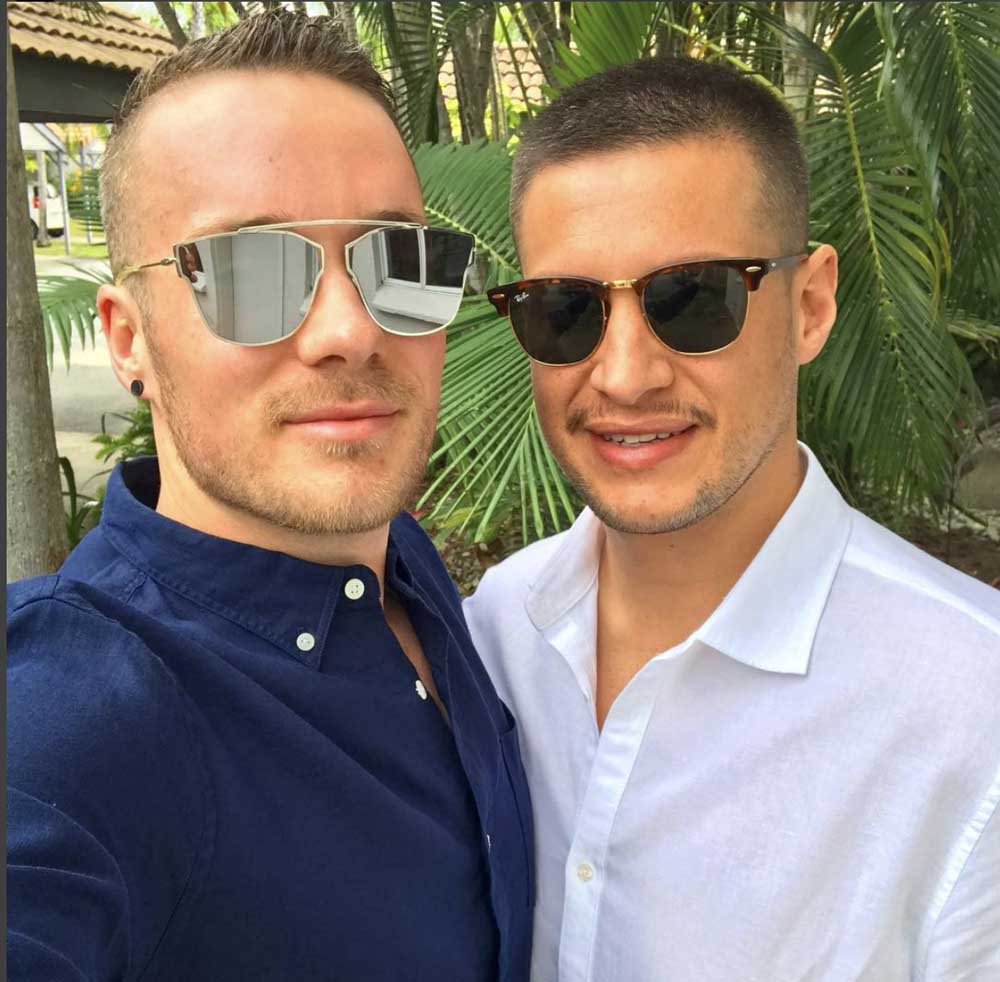 Josh S. & Josh B. will be married during winter in the tropics on Friday 3rd of August 2018. The ceremony will be held at 2pm, which is the ideal time to tie the knot during winter!!  There will be 50 of their nearest & dearest joining them to celebrate their love at Paradise Cove. We will be catching up with the Joshua’s in May to fine tune all those little details for their wedding. During their time here in the Whitsunday’s  the couple will visit Paradise Cove for the first time ever! Here is a little preview of what the Joshua’s have planned for their intimate love celebration!! 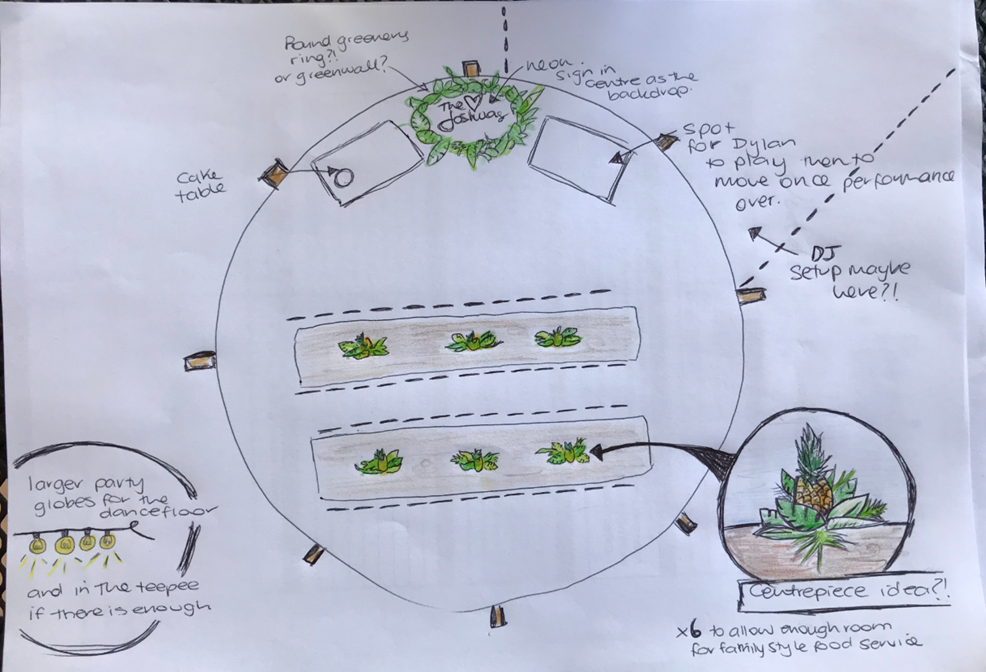 Reception mock up as drawn by the Joshua’s!

The Joshua’s plan to day “I Do” on the beach front of Paradise Cove. The couple have planned to have a beautiful round arch made for the alter & the ailse will be decorated with 6 pineapples and tropical leaves. There will be an area close by the beach reserved for Post-Ceremony nibbles & drinks. Maybe even a portable bar/table with drinks… Possibly cocktails as well as the antipasto platters!!! The festivities will continue to take place under a big beautiful teepee with lights leading out to the dance floor area. The Joshua’s have a custom neon light for a backdrop feature in the teepee. They thought this would look amazing surrounded by a round green tropical style wreath, set at the end of the teepee where the sun would be setting behind it. There will be some timber tables with lush tropical bouquets as centre peices, but instead of flowers, just a pineapple in the centre of the leaves!!! 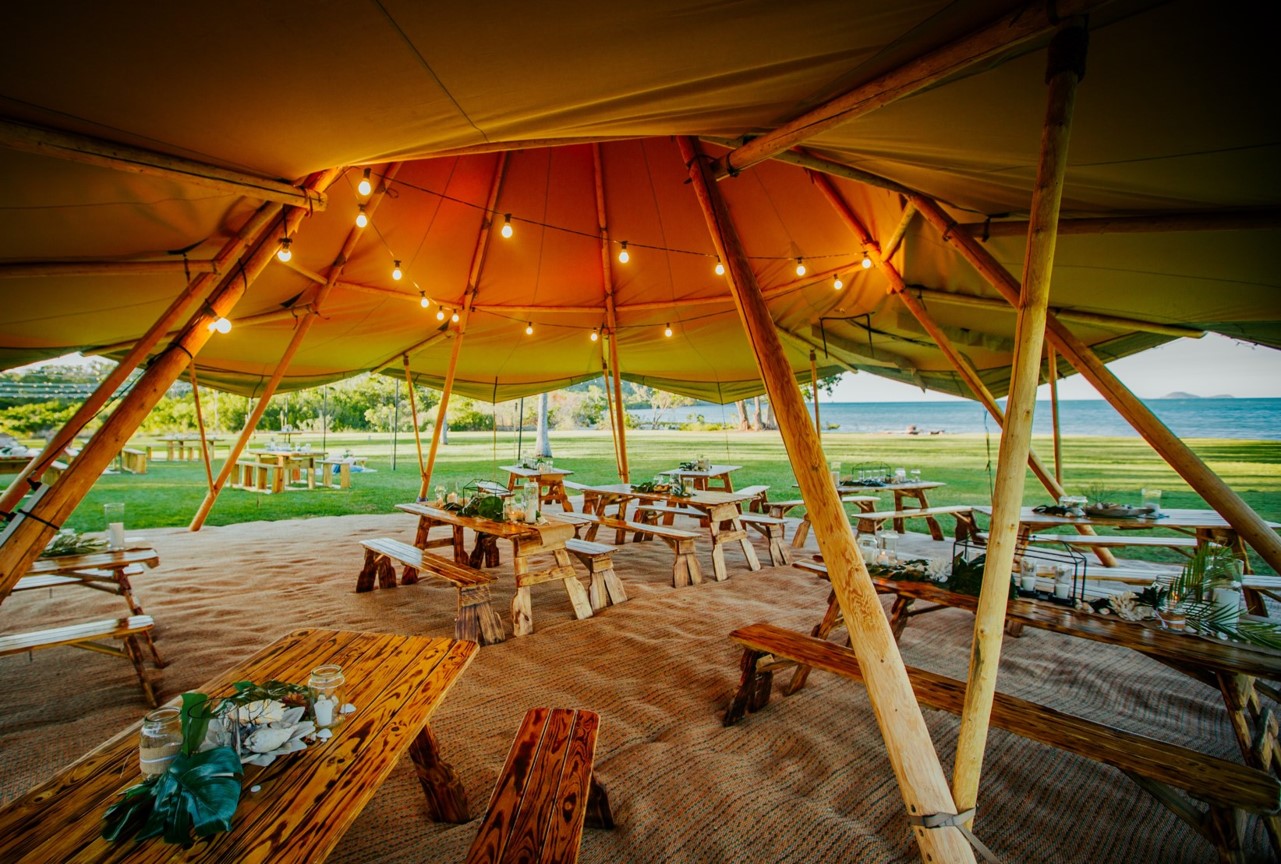 Teepee inspiration for the Reception. 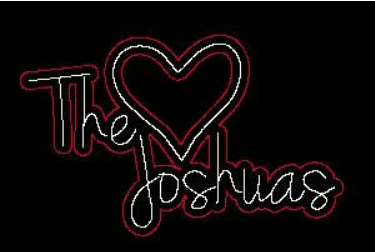 Artwork supplied for the custom made neon light.